skip to main | skip to sidebar

Well it has been a while since I have updated this blog so I guess it's well past time I got in gear and gave you some of the news on what happened to me this past summer. Earlier this year my folks decided it was time to buy something called a house and move out of our apartment. The apartment was the only home I ever knew since I was just a pup. I came home to our apartment when I was just eight weeks old and I didn't know what it would be like to live somewhere else. After they knew where the house was and knew we were moving (I was glad to hear Ruby and I were going too!) all they could talk about was how much Ruby and I was going to love the new house (but they've been wrong before, they said I would love having a little sister, OK, I like her a little bit I guess so they were not technically "wrong" but close enough for country music!). The also kept mentioning something called a back yard. Well, for any of you that don't know what a back yard is, let me tell you that you are certainly missing out! Here's some pictures of me and Ruby enjoying the new house, especially the back yard! 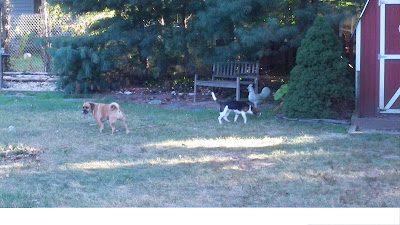 Lot's of grass, and trees, and a bench and there's a shed out there that Pop uses for the lawn stuff. 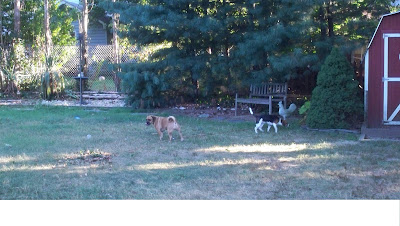 I think that's the same picture only further away. The yard is fenced in so I get to run around where ever I want but part of the fence has spaces in it that are wide enough that Ruby could slip through so she either has to go out on a leash or get tied to the run. Whenever I get tired of being bothered by her I just go where she can't go. She doesn't mind being outside tied up by herself either, but if Ma and Pop goes back into the house I like to come back in with them. 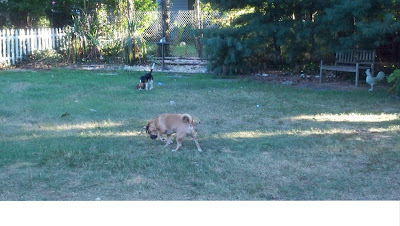 I smell something! I think Ruby does too! It's like having our very own little park. Pop even plays fetch with me. I like the tennis ball but Ruby chases anything, even sticks, and then she chews them, she's silly like that. She has also decided that she likes to take her new rawhide chews outside to let them "age". I guess to get tenderized by the weather. One of them got tenderized real good when Pop ran it over with the lawn mower! It made a really loud noise but now it's the Rubester's favorite piece of rawhide! Go fig! 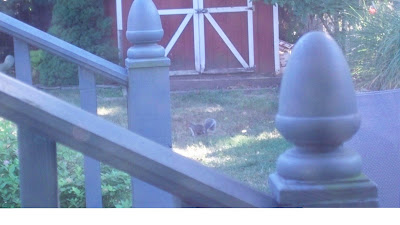 I think this squirrel that trespassed into my backyard might be what we were sniffing in the other picture. We named him "Secret Squirrel" because wherever he goes when we are outside must be a secret. 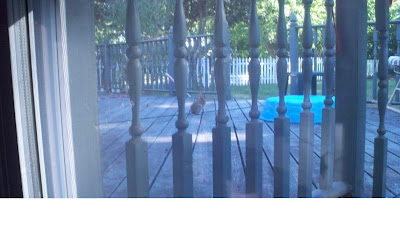 Or maybe we were smelling the "Wasciwy Wabbit" that Ruby has gotten very close to catching. She did catch a smaller rabbit and a bird. Ma was kinda upset when she found them lying in the backyard. Ruby's a hunter though, that's what she does. I guess I'm more of a lover cause I don't go after them like she does.

I ain't no ordinary dog, I am a Designer Dog, a beagle mom and a pug dad, that makes me a Puggle! And no ordinary Puggle, I am The Nuclear Puggle, aka Psycho Pup aka Bumbler to my family. Hope you enjoy hearing about my adventures!

Paws on the Web